It’s not called a Zeppelin unless it comes from the Zeppelin region of Germany, otherwise it’s just a sparkling airship.

I have spent a lot of time writing about building cities on Mars , and I would like to reassure my readers that I have been thinking about other ways to more or less rapidly consume a fortune. 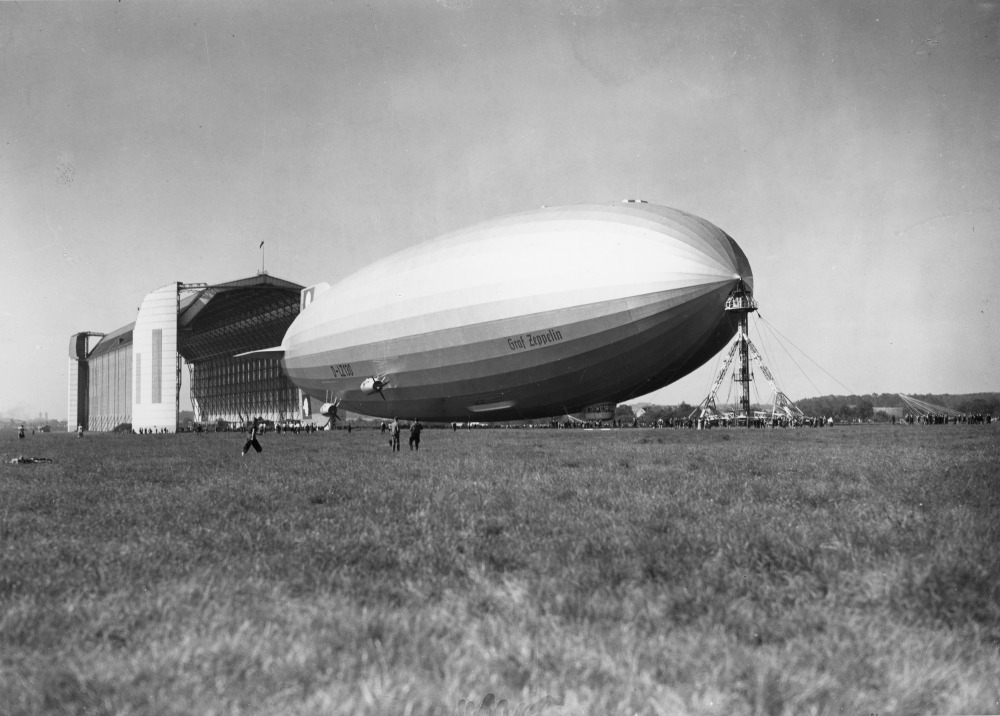 Let’s talk about airships. Yes, they’re hulking behemoths with no real uses and a horrifying safety record. But aside from that, how would you like to get from place to place in a stately fashion? Why cram yourself into a COVID-infested tube at 35,000 feet to zoom around the world in hours when you could promenade the deck while watching the world pass silently from 500 feet or so?

The Pitch: Rebuild the Hindenburg. But better!

Structurally, I’m going to trust that the Zeppelin engineers knew what they were doing. They built the overwhelming majority of airships that actually worked and didn’t break apart, though the US, UK, Italy, France, Spain, Japan, and Russia all had a go.

But they were built of primitive 2000 series aluminium alloys, doped canvas, and cow gut. I think we can improve on the materials. In particular, carbon fiber pultrusions are about six times as strong and far simpler to assemble than the typical recursive riveted Zeppelin truss. 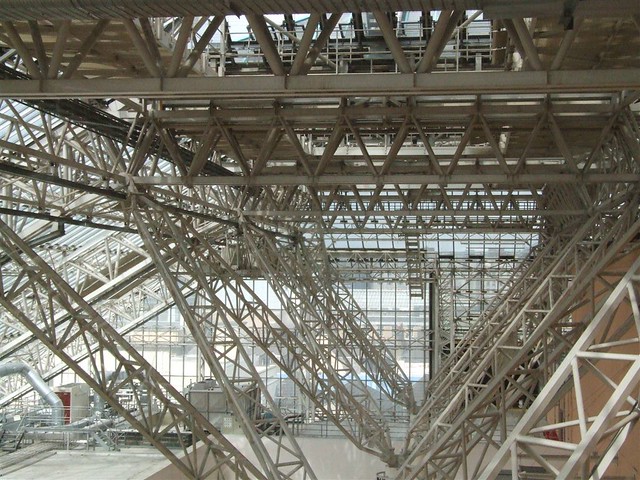 These beams could be integrated with injection molded nodes and tensioned with Kevlar cables. Gas bags would be aluminized mylar (space blanket) while the outer cover could be ripstop Nylon. (It is hard to overstate just how much better Nylon is than what came before. Try skydiving with a hemp parachute!)

Alternatively, one could optimize for cost instead of performance and cobble together a functional structure from foam core fiberglass produced onsite with simple tooling and assembled like LEGO by hand in the open air.

Alternatively, use a welded aluminium truss segment like the ones used for events. There are about half a dozen manufacturers just in Los Angeles, and while some tooling changes would be needed to support a thinner tube wall, the Hindenburg needs about 20 km of truss.

The exciting thing about the low cost approach is that it closely mirrors the approach of the original Zeppelin designers, who were severely resource constrained. Indeed, with modern materials I think it could be possible to home-build a Zeppelin at a similar scale to the Bodensee for less than $100k and with less than ten person-years of labor. This brings it into the realm of home built yachts and kit aircraft.

Such a home built would have to use innovative manufacturing to be assembled outside a large hangar, perhaps by extruding it tail first from the ground. It may also exploit a more conventional power system with salvaged automotive engines turning propellers in pods. The lifting gas of choice would be hydrogen, in order to keep operating costs low. Provided the space between gas bags and cover is sufficiently well ventilated that hydrogen can never build up at a concentration between 4% and 75%, ignition and/or deflagration is unlikely without a major structural failure or gas bag tear.

Let’s consider the mass roll up of the Hindenburg. 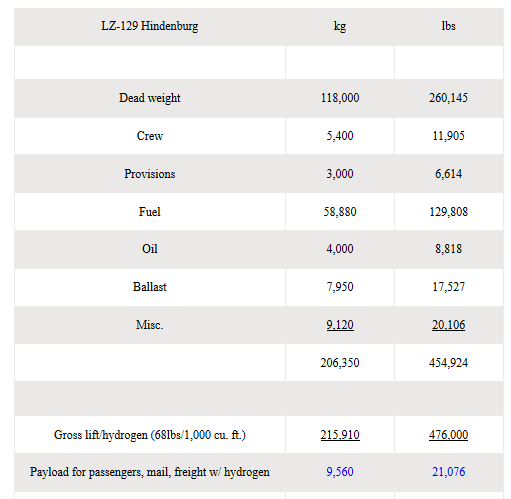 The structure, at 118 T, is just over half the total lift of 216 T. Doubling structural margins with composites could still reduce overall structural mass by a factor of 3, to 39 T, while also greatly simplifying assembly. That’s less than the weight of a railway carriage! All else being equal, the payload increases from 9.5 T to 88 T, almost a 10x improvement. Payload fraction increases from 4.4% to 40%.

With all these mass savings we can easily use helium without damaging the lifting capacity. Given that the first Hindenburg burned, killing a third of its complement, non-flammable helium might seem like a no-brainer. At $3 a cubic meter, the airship would cost about $600k to fill. Helium is much cheaper than it was in 1935, but we might want to avoid venting a lot of it, if only to respect the ongoing global helium shortage.

The US Navy built and operated a pair of helium-filled airships, the Akron and the Macon. Without relitigating ancient history, both crashed early in their prospective careers, with loss of life. Helium didn’t make them much safer, and helium-derived design choices may have contributed to their demise. Indeed, relatively few airship accidents involved hydrogen (many of whose fires began with fuel), though it is fair to say that its presence can rapidly make a mess a very hot mess. Hydrogen is about a thousand times cheaper than helium, such that the airship could be refilled every flight if desired. It might even be possible to spike it with fire suppressing gases such as Halon (or less horrible FE-13, between 12 and 20% v/v) without substantially reducing its lifting capacity.

I think a fair design assumption will be helium combined with electrical compressors and storage for trim adjustment in flight.

The Hindenburg had 59 T of fuel and 4 T of oil. Operating with relatively primitive and heavy diesel engines, it could cruise at about 80 mph, crossing the Atlantic in 2.5 days. As it burned fuel it either had to vent hydrogen or capture rain to offset the reduced mass. The earlier Graf Zeppelin used neutrally buoyant blaugas, enabling longer flights over the equator to Brazil since burning didn’t change the weight of the airship.

But there’s no rule saying we have to afford the Zeppelin designers the benefit of copying their propulsion system. Like materials, we can assume that if they had something better, they would have used it.

My suggestion is to affix a steerable electric fan to each structural node. These ~1700 small motors would be able to completely control the boundary layer flow over the airship, stabilizing it in gusty wind and enabling fine-grained control while maneuvering. No need for a big, heavy and structurally vulnerable tail. Many airships were damaged or lost due to gusts while attempting to dock or enter a hangar. No more!

Each motor would be powered during the day by thin film solar panels built into the airship’s skin. This should be able to drive it along at about 50 mph. This number is quite robust to scaling as both drag and power increase as linear dimension squared, while elongating the airship to reduce frontal area both increases structural difficulty and doesn’t actually improve drag.

For additional power or during the night, a neutrally buoyant mix of propane and ethane can be burned in a compact turbine generator. In such a case, range is limited only by what fraction of the envelope is devoted to fuel as opposed to lifting gas. Powering cruise at 50 mph for 7 days would require 33 T of gas, which would consume about 15% of the displacement volume. This increases as the cube of speed.

The original Zeppelins never made money. By the time the Hindenburg flew, all the oceans had been traversed by conventional aircraft, showing the way of the future. While passengers had more space, quarters were still extremely spartan and the walls were literally paper thin, to save weight.

The return of the airship has been mis-predicted many times. Despite hopes, they are not particularly useful for hauling cargo to remote areas. Airships depend on finessed trim and buoyancy – so dropping or picking up a huge cargo load somewhere is a big ask. They’re also not much use near the ground in wind, and no better than alternative logistics methods for delivering containers anywhere.

Nevertheless, we can be optimistic about the return of the airship provided we relax just one assumption – that it will make money. But, like Mars exploration, perhaps it’s possible if only we can find a way to lose money more slowly!

Following mass savings from modern materials, a Hindenburg-sized airship could potentially transport many hundreds of people on regular flights between major cities. In this sense, they look and feel like a cruise ship. A cruise ship of equivalent size costs in the hundreds of millions of dollars to build and also barely makes money, despite exploitation of tax havens and unregulated labor markets.

I think a modern Zeppelin could be built for less than ten million dollars. A small fleet could operate daily flights on a route such as Los Angeles, New York, London, Paris, Istanbul, Shanghai, Tokyo, Seattle. Others could offer specialty tours over the poles or to remote islands, much as cruise ships do today.

Provided one does not intend to hangar them, there is no limit to how big they can be built. Indeed, larger airships have better margins in all kinds of ways. Perhaps the future of sea-steading is in the sky?

18 thoughts on “A quick note on airships”