Amid discussion of anthropogenic climate change there has been a steady stream of advocacy for nuclear power to provide low carbon electricity. Several of my exceptionally clever friends describe themselves as being on Team Nuclear, so I wanted to understand a bit about the argument and how the future might play out. 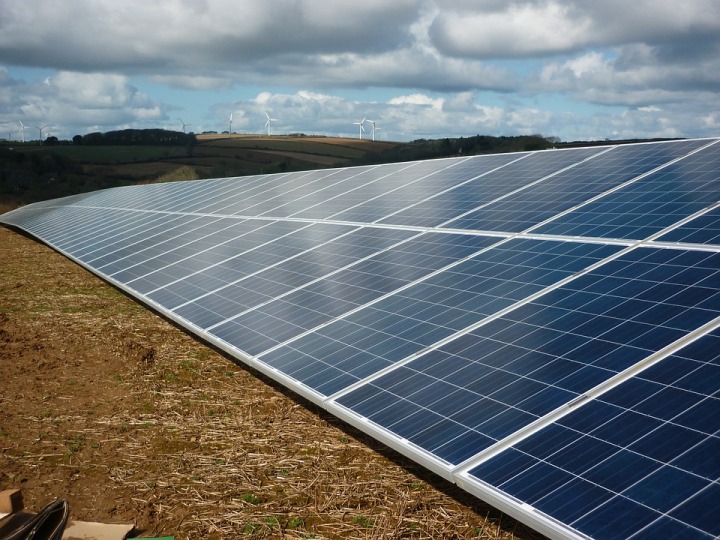 Nuclear electricity has a bit of a bad reputation with the public, due in part to inaccurate perceptions about risk. I happen to believe that solar power will prevail, but for the purposes of this blog, I happily concede that nuclear is significantly less harmful to human health, and has a much lower death rate, than any other form of fossil fuel-derived energy. Even end-of-life disposal costs and radioactive waste are much less harmful than the waste products of, say, coal mining and burning, on a per-kWh basis.

Why, then, do I believe solar power will prevail? In summary, simplicity.

I developed a huge spreadsheet to model costs and the market, but in the end most of the story can be told by looking at relative rates of production, construction, and investment.

It is important to note that while solar currently has more installed capacity than nuclear, nuclear generates more power as its capacity factor is about 0.9 compared to 0.15 for solar. Capacity factor encapsulates average output divided by peak output. Nuclear plants are designed to operate at constant, high output for many years between refueling, while solar doesn’t work at night.

So, in terms of total capacity installed, not only is nuclear comparable to solar, the grid batteries necessary to make solar useful in the evening are woefully underdeveloped. If adequate policy changes were enacted in a timely fashion, could nuclear power scale enough to meet nearly all our electricity requirements?

To get a feel for the scaling question, let’s examine the annual growth rate for these power sources:
Nuclear – 0.3%
Solar – 26%
Grid storage batteries – 243%
That is not a typo.

In more detail, consider this graph from Wikipedia showing growth in the nuclear industry over time. Even at peak construction in the early 80s, growth was around 7%/year. Since the Chernobyl accident, global investment and deployment has stagnated.

Compare to this Wikipedia-derived chart of solar PV growth, showing exponential increases over 40 years. Indeed, the current growth rate of solar, a blistering 26%/year, is well below the peak in 2010 of about 50%/year. While not captured in this graph, solar costs fall by about 10%/year, while investment grows at about 20%/year. It is a good time to be in that business! 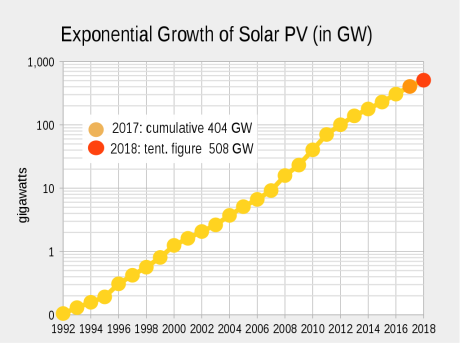 What about batteries? In addition to being needed for electric vehicles, batteries are needed to buffer the supply of wind and solar power, stabilizing the grid over timescales between minutes and a day.

Incredible sums of money are being invested in battery technology because as wind and solar grid penetration climbs, batteries are increasingly necessary, and lucrative to operate. I believe that the growth of grid storage batteries will capture the value of gas peaker plants and dominate the FCAS market.

But can batteries and solar meet 100% of energy needs? Essentially, yes. With current battery technology of about 100Wh/kg and $100/kWh, 30TWh of battery storage for loadshifting would cost $3000b. This sounds like a lot but the global energy market turns over about this much per year. That many batteries, with 2018 technology, would weigh 300m Tonnes, or consume 15 million TEUs. If they were to be transported around the world, this would fill about 1000 containerships. Over a decade-long installation program, 2018 costs would consume about 1.5% of global GDP and 1% of shipping container volumes. Continuing current trends on cost and density would halve these values. I think this is relatively modest.

All I have shown so far is that under present circumstances, solar and batteries are rapidly outpacing nuclear, as well as every other form of electricity generation. Indeed, from a standing start I think it would be difficult for nuclear to catch up, given that at the current trajectory solar will meet worldwide demand by about 2030, and new nuclear plant construction takes about a decade.

But, to be more certain of this conclusion, it is necessary to understand why solar and nuclear have such different trajectories. Is this just a regulatory issue that could be fixed tomorrow? Or is there a deeper, underlying technical reason?

Solar is competitive because it’s cheap, easy, safe with unskilled labor, and not a proliferation risk. Nuclear construction today can be done safely. But solar is safe by default. Solar is cheap because it is simple. It doesn’t require X-ray weld inspection of stainless steel containment vessels. It requires only generic foundations and a generic electrical connector.

But I think this comparison neglects the single most important reason why solar is crushing nuclear. After all, a much simpler and cheaper nuclear plant could be invented tomorrow!

The reason solar is winning is because the manufacturing technology can be iterated every six months, so the learning curve is much faster.

Nuclear power plant technology is iterated roughly every 25 years, or twice in the lifetime of a plant. Many first generation plants are still operational, while few third generation plants have been commissioned, and fourth generation plants are still in the planning stage. Even if every design iteration was a factor of 10 better than the previous one, solar, iterating 50 times faster, could outdo this improvement over the same timescale with a mere 5% improvement per iteration. Since this is roughly the solar learning rate, we can now ask if each nuclear design iteration is 10x better than its immediate predecessor. Obviously not.

But decarbonization of electricity is important enough that surely there is room for both nuclear and solar? Oh that this were the case! Nuclear plants are expensive infrastructure with an EROI that is measured in decades. The continuing development of ever-cheaper solar power adds an unacceptable level of financing risk to any nuclear plant development. That is, the business case for a new nuclear plant development would be in serious trouble if the wholesale electricity price dropped by even 10%. Yet we’re within a year of solar developers bidding <$10/MWh, which is more than 10x cheaper than the cheapest electricity I’ve ever paid for.

Even if the regulatory burdens and public perceptions about solar and nuclear were reversed, I very much doubt that nuclear would be able to compete in this environment. How can nuclear plant developers borrow money if their business case might evaporate before they’re done pouring concrete?

I don’t imagine that this is the last word on nuclear power. In particular, I’m very bullish on its prospects for electricity generation in space. If I have neglected some crucial piece of the puzzle, please let me know.

13 thoughts on “Is nuclear power a solution to climate change?”