In my previous blog, Unpopular Opinions In Space, I wrote that while expensive, developing a bigger rocket is often a cheaper and easier solution to any given problem in space. In this post, I elaborate on this theme while trying to understand design constraints in space station construction.

Humans have launched 16 space stations since the 1960s, of which 10 were functional enough, for long enough, to be occupied at least once. Following the cancellation of the Soviet N1 Moon rocket, the Soviet Union built a series of space stations for civilian and military purposes, exploiting their Proton medium lift launcher. These stations weighed about 20 tons and had a pressurized volume of about 100 cubic meters, which is similar to the average living room.

Starting in the late 1970s, Salyut 6 and 7 pioneered modular station design, wherein a space station would be built from multiple parts, launched separately and integrated in space. Extra modules brought more supplies and could extend missions. Salyut 7 was followed by Mir, which was built with four launches over four years starting in 1986. About 10 years later, during the Shuttle-Mir program, three additional smaller modules were added, and by the time Mir was splashed in 2001 it had hosted 125 astronauts and cosmonauts in its 350 cubic meters of pressurized volume.

Of comparable size and cost (~$2b) was Skylab, launched on the last of the Saturn V rockets in 1973. Because the Saturn V was substantially more capable than the Proton, Skylab was launched in a single shot, and subsequently hosted 3 crews for a total of 171 days.

The 1980s saw the first flights of the Shuttle. With its enormous cargo bay and reusable design, Shuttle was originally intended to enable the construction of Space Station Freedom. By the time its moral descendant, the International Space Station (ISS), was funded the Shuttle was nearing the end of its serviceable life. Also, by 1998, it was painfully obvious that Shuttle was never going to achieve anything like its design flight rate and costs, which were initially targeted at $100/kg to orbit, with about 50 launches a year. Actual numbers were more like $60k/kg with up to four launches a year.

And so the ISS was built with 33 main launches over 13 years, costing more than $150b and providing just over 900 cubic meters of pressurized volume, of which about 350 is not consumed with equipment. That is, for nearly 100x the cost and 20x the time, the ISS provides 2.5x more volume than Skylab, which was designed in the late 1960s. This is not progress.

Why is this the case? Modular space stations are a neat solution to a difficult problem. How to build a bigger station than can fit in an available rocket? Simply break the components up, build a set of common interfaces and plug it all together like LEGO.

And yet it is clear from the ISS’s example that modular efficiencies do not scale perfectly forever, or indeed at all. For example, the Saturn V could have been rebuilt from scratch for 1/20 the money in 1/4 the time, and 4 Skylabs docked together would be much larger. To take a more modern example, the SpaceX Starship (currently in development) has more than 2400 cubic meters of internal volume, including tanks, and is targeting a mere $5m launch cost. 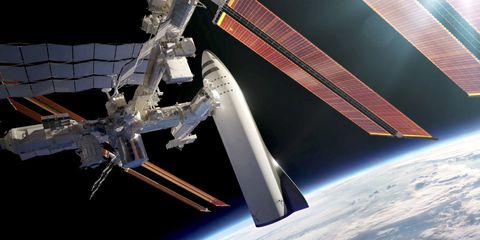 Of course, there’s nothing magical about 900 cubic meters of volume. It just happens that this is the capacity of a Shuttle-launched station pushed to the most grotesque limit. If the ISS designers had had a mature Starship to work with we might have ended up with a huge Stanford torus. It is possible, though I think unlikely, that at some critical size space station utility undergoes a positive inflection, where operations magically become generically profitable.

To take the other extreme, consider Rocketlab. The Electron is a plucky rocket but if New Zealand wanted their own space station, I very much doubt they’d attempt to assemble one from thousands of pieces all weighing less than 200kg!

Indeed, if a new station was needed of a certain mass, then the designers could do worse than examine which launchers or payload masses had a high mass capacity to orbit on a per-year basis! For instance, while more launches of smaller payloads (~5T) occur each year, the peak shifts upwards (~20T) when normalized by total mass. Station designers may benchmark module mass at the limit of the most capable launcher available, which today is Falcon Heavy. But if a station requires more than, say, 4 modules with the launcher of choice, then it will probably save time and money to develop a new launcher!

Modules have certain advantages. They can be specified and farmed out to multiple contractors, allowing parallel construction with decoupled schedules. They are easier to transport and may be able to take advantage of existing launchers. Building huge new launch systems is fun but if they aren’t routinely flown then the skills to run them may be degraded over time.

Modules also have a range of disadvantages. Mechanically, modules are linked together with docking adapters – heavy double doors that are used only once and serve as stress concentrations as the station moves. Indeed, metal fatigue within ISS modules places a definite limit on station longevity. Even astronauts working out shakes the station enough to damage the structure and eventually cause cracks!

Schedule benefits are clearly not what they would seem. Every modular station ever built has not achieved more than one major component per year (on average) during construction. If the purpose of the station program is endless construction, then that is no big deal. But if the purpose is to execute and commission some well-defined design, then a smaller number of modules will enable the program to finish more quickly. It’s not impossible to imagine the mass production of identical modules, but no stations are built simply to maximize internal volume. Each module has a unique purpose so requires a lot of custom equipment. None of that equipment can break anything else, even on other modules that aren’t built yet, and none of the equipment can break since the launch is so expensive. All these factors add costs and slow production rate.

Modules have a major systems-level drawback too. In theory, modules are like LEGO and can be reconfigured in an infinite number of ways. But in practice, they are all exquisitely engineered machines with overlapping sets of requirements. The effect is that every additional module increases the complexity of systems interactions and degrades the versatility of the structure as a whole.

This aspect of tightly coupled, complex systems is well known to designers of nuclear power stations or large jet planes. In short, in tightly coupled complex systems, failures can occur and propagate too quickly for human operators to understand or mitigate, greatly increasing the risk of catastrophe. The ISS, due to large numbers of modules, is compromised at the architectural level in a way that no amount of careful design and redundancy can fully address.

There is a further design challenge. Conway’s Law describes how systems always mirror the communications structure of the organization which designs them. The effect of splitting a space station into many different parts is that the requisite interfaces create new and otherwise unnecessary barriers to communication, negatively affecting overall integration and increasing complexity. Relatively few subsystems or behaviors will fit exactly within one module, so in practice already complex systems such as life support or power will either have to be duplicated or split between multiple modules, exponentially increasing failure modes and complicating analysis.

Individually, small design compromises here and there are not a big deal. In the aggregate, however, they subject an already marginal system to gratuitous levels of functional degradation. Getting stuff to orbit and keeping it working is hard enough!

This is why, I think, that the ISS produces fewer human-hours (per month) of research than Skylab or Salyut, despite weighing 20x more and having nearly 10x as much internal volume. Of the 6 astronauts flying on the ISS at any one time, about 5.5 of them are busy with station maintenance.

Space station construction is just one area where building a bigger rocket is the cheapest, quickest solution. Indeed, even SLS development is proving to be cheaper and faster than ISS construction.

Regarding NASA’s goals with human exploration of the Moon or Mars, it is not clear to me that the space station is able to answer any of the important questions. Would a station built on the Moon or Mars be better placed for research? Definitely! Would another station built in LEO at vast expense help to get to the Moon? NASA didn’t need one the first time around!

This blog isn’t the place to relitigate design choices that were made for the ISS well before I was born. The concept of modular design was evidently compelling enough to give it a try! The real question, in 2019, is whether we will learn from our mistakes. Will our future space stations be more focused, discrete vehicles designed to execute on a well-defined mission?

Space station design has to reflect purpose. We don’t need to rebuild the ISS from scratch to relearn the harm of excessive modularity!