NASA’s incredible campaign of rovers and landers have taught us amazing things about the Martian environment. Just in my lifetime, the technocratic dream of building cities has become orders of magnitude more concrete, due in large part to our rapidly expanding knowledge.

The human story is so central even to robotic exploration that scarcely a discovery goes by without a series of articles explaining how and why it might make building a city more or less difficult. Many of the blogs in this series riff on this theme.

One of the more interesting discoveries of recent years was that the dirt on Mars contains a lot of perchlorates. Perchlorates (not percolates!) aren’t friendly chemicals to humans, so the immediate concern was whether this was a show stopper for human exploration.

I could jump into an explanation, but instead let’s talk about planetary surfaces. Here are two photos of generic surfaces on the Moon and Mars. We can enumerate some trivial differences with more familiar landscapes on Earth. The sky is different. The Moon rocks have an odd texture, and the features on the ground are rounded and soft-looking. Mars is red, the rocks are dark and faceted. All a bit alien from 6 feet off the ground, but no more so than, say, parts of Death Valley.

And yet. Our intuition about these surfaces is still based on our lives and evolution on Earth, and is very wrong. Let’s talk briefly about the Moon before returning to Mars.

The surface of a planet is a function of the geological processes that generated it. On Earth, the rock cycle is driven by our weather, where water and wind grind down mountains and form dunes and deltas. In many places, the surface is made of soil, a mixture of rock fragments, air, worms, roots, bacteria and fungi.

The moon’s surface is layered with a fine dust, the particle size averaging about 0.1mm. This is just on the edge of human visibility, but would taste noticeably gritty. Under a microscope, the grains are jagged, sharp fragments of rocks that eat at seals, space suits, and lungs. The moon is effectively covered by a beach of ground up glass, in some places hundreds of feet thick. Indeed, the surface is constantly being churned up by impacts, which is why older/larger features are eroded and softened.

Mars has dunes and rocks and dust bowls, but looks are deceiving. The surface is, by Earth standards, overwhelmingly old, cold and dry. The dominant erosive processes are wind, but the Mars atmosphere is so thin that what looks less than a million years old could easily be 100 times that.

When Insight landed on Mars, we saw what looked like a mix of fine pebbles and sand, dropped the heat flow probe, and then were surprised when it jumped back out a few times. The surface is much more crusty than expected. It doesn’t act like it looks. It’s the opposite of quicksand! 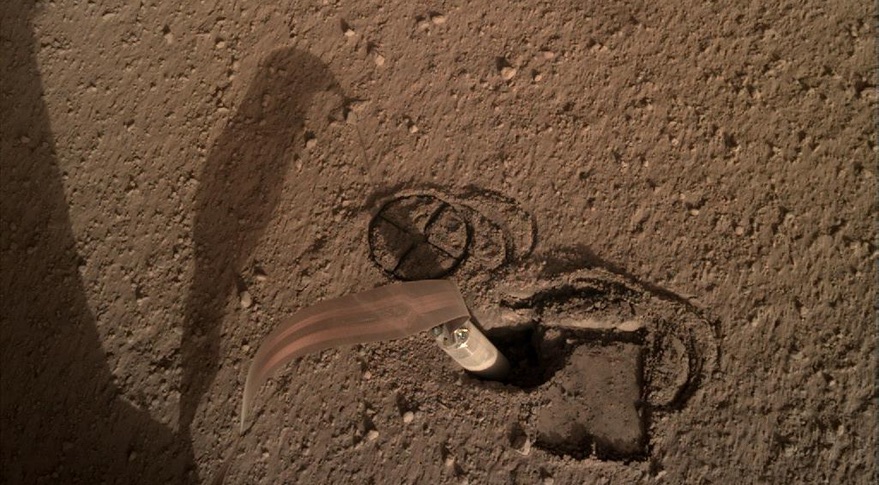 Likewise, our expectation on Earth is that soil is pretty chemically homogeneous. If a layer of very alkaline dust blew in from somewhere, a day or two of capillary action or even a quick rain shower would neutralize the deficit. Not so on Mars.

Instead, while the ancient rocks show signs of neutral or even reduced pH when water flowed billions of years ago, the red dust that coats everything is much more oxidized, hence the color. This is weird! Some minerals are so oxidized that they have formed perchlorates, where the anion is ClO4-. If astronauts on Mars tracked Mars dust into the hab, it wouldn’t be good to eat it, where in high doses it can inhibit thyroid function.

On the other hand, these same perchlorates radically lower the freezing point of water droplets that condense from the atmosphere at night, raising the possibility of near-surface aqueous environments that could support life.

As for enclosing parts of the Martian surface and building greenhouses, would decontaminating soil be a big problem?

I don’t think so. Perchlorates are much less stable in a warm, moist environment. The electrochemistry on Mars is a long way from its lowest energy state, inhibited only by a lack of water to complete the reaction. Reacting perchlorates with the more reduced substrate would cause them to decompose and release oxygen! Concentration varies from place to place but plants need oxygen as well as CO2 to breathe, so I could imagine pressurizing a greenhouse with local CO2, heating it up, wetting the soil, and letting it fizz off enough oxygen to get things started. At worst, decontaminating suits would be a nuisance more like cleaning ones boots than getting out of a hazmat suit.

This is good news! Perchlorates probably don’t make the list of the top ten most likely ways to die a gruesome, premature death while living on Mars!

5 thoughts on “Even the dirt is poisonous!”