Part of my blog series on common misconceptions in space journalism.

As far as popular riffs on space exploration go, “the sky is falling” is one of my all time favorites. Space is hard, and analogies are almost always wrong. Collisions between satellites do occur and they are a really big deal.

It is hard to accurately convey just how energetic satellites are. When they re-enter the Earth’s atmosphere, they mostly burn up, as though they fell into a fire. But the atmosphere isn’t especially hot. Instead, the kinetic energy of the satellite is dissipated by boiling the metal that the satellite is made from. 7.8 km/s is a typical speed in Low Earth Orbit (LEO) and that’s really really fast.

For high velocity collisions closer to the ground, the number or size of fragments is a good proxy for speed. When a fast moving object comes to a sudden stop, it tends to make a small hole in the ground, and tear itself into pieces until all its residual kinetic energy is used up. If a passenger jet hits the ground at high speed, the characteristic fragment size is a few inches across. This classic video illustrates the general principle.

Satellite collisions are like this, except that they’re going 25 times faster and have 625 times the kinetic energy. In short, if two satellites collide they generally explode into thousands of tiny fragments, which continue to zoom around the Earth in a set of similar orbits to the progenitors.

To quote Douglas Adams, “Space is big. You just won’t believe how vastly, hugely, mind-bogglingly big it is…”. We have launched just under 5000 satellites over the last 60 years, each one about the size of a car. A typical city has millions of cars in a much smaller space, all confined to a two dimensional plane, and yet collisions are relatively infrequent.

But satellites cover a lot of ground very quickly. In LEO, it takes about 90 minutes to completely circle the Earth. Many satellites are in polar orbits which converge over the poles, and given enough time, collisions are inevitable. Four such have occurred thus far. Additionally, five deliberate collisions during tests of military anti-satellite systems have also occurred.

Each of these collisions has produced a cloud of debris that, due to orbital perturbations and residual atmospheric drag, gradually spreads out.

It is not possible to track most of the debris, as it is too small to be imaged with radar. The real problem comes when one of these millions of pieces runs into another satellite. Because of energy involved, each such collision will spall off more pieces, generating more debris. This is the basis of a runaway chain reaction, which may eventually lead to Kessler Syndrome, where the spread of debris gradually yet inexorably converts all of our satellites into a persistent overhead sheath of deadly hypersonic metal shards. Obviously, this would be a Bad Thing.

Kessler Syndrome formed the basis of the movie Gravity, yet another contribution to the genre of astronauts coming to a sticky end. The really worrying thing about Kessler Syndrome is that it is a slow-moving yet unstoppable disaster. Because a satellite debris cloud takes about 90 minutes to return to the original impact location, the characteristic timescale for the chain reaction cascade is measured in years, rather than the microseconds seen in nuclear explosions. But by the time it gets bad, it may be too late to do anything about it.

What is the current state of this problem? We’ve had satellite collisions every few years for the last decade, and we can map the prevalence of debris by altitude, as seen below. 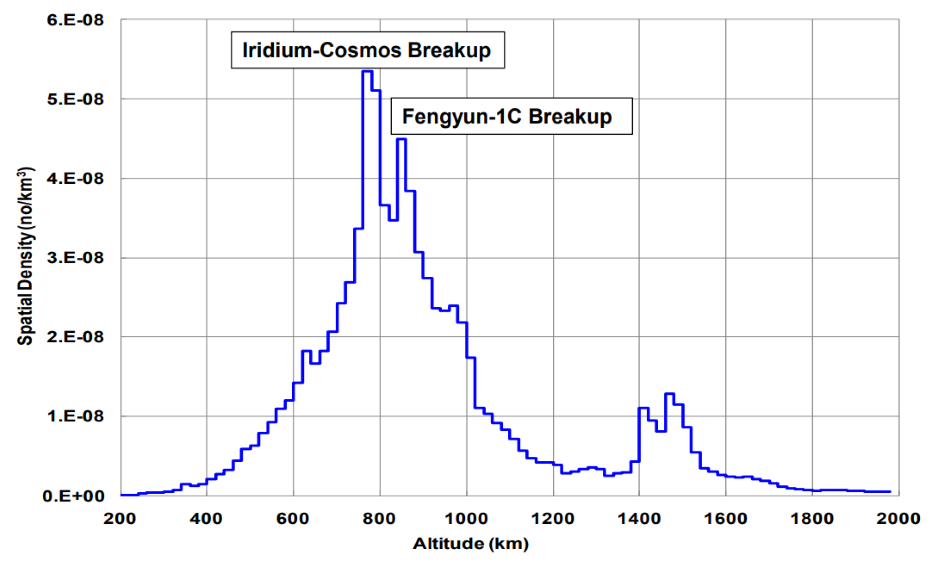 In this chart, satellite debris stemming from two separate incidents gradually spreads out in altitude. But at the 400 km altitude of the ISS there is relatively little. Why is that? In fact, the whole curve up to the first peak is relatively smooth.

What’s going on here is that debris at different altitudes has different characteristic lifetimes, due to atmospheric drag.

The other important characteristic is the ballistic coefficient of the debris. A large, light object like a piece of foil insulation, will experience more drag relative to its momentum. Conversely, a dense piece of material such as a mounting bracket or bolt will “punch through” atmospheric drag much more effectively, and de-orbit more slowly.

So in the case given in the movie Gravity, a catastrophic debris cloud at the altitude of the space station is bad, but after a few years it would be almost all gone. It’s not even certain that Kessler syndrome could be sustained with such high levels of damping. In contrast, a debris cloud at 800 km, which is where all the Iridium satellites live, could persist for thousands of years.

What can be done about it? All satellites launched into LEO today need to have at least a basic disposal plan, which includes enough fault tolerance to de-orbit if something goes wrong. For cubesats thrown off the ISS, relatively few precautions are required since they all de-orbit within a year or so anyway. For the latest generation Iridium satellites, substantial precautions are needed because their orbits are already getting messy and natural de-orbit takes so long. Additionally, satellites need to be built from materials that will burn up in the atmosphere so as to avoid large chunks of tungsten from smashing people’s houses.

Starlink’s satellites are overwhelmingly planned to fly as low as possible, ensuring a rapid de-orbit in the event of failure. The low altitude is an essential part of their business as it helps them focus more data on a smaller number of users.

For existing derelict satellites in these higher polar orbits, there are serious moves to find ways to grapple them and bring them down into the atmosphere. Unfortunately, this is very non-trivial. There are no known (i.e. non secret) successful robotic grapples of uncooperative and probably tumbling derelict satellites. A couple of missions have attempted satellite proximity/servicing demonstrations, but have actually resulted in (slow) collisions. It is not hard to see that a failed retirement mission could make things even worse.

Numerous future proposals including nets, bags, slings, and tethers have all been proposed but as far as I know, none are in active development. Part of the reason for this is that having a satellite abduction technology ready to go is a proliferation risk. The shuttle was designed partly for this purpose but, as far as I know, was never used this way against an adversary’s satellite.

There is one other, though rather obscure, approach for clearing debris. Patented by the US Navy in 2011, it calls for the head-on launch of tons of finely ground tungsten powder into the orbit that needs clearing. This is a deceptively simple concept. Recall that the two main factors affecting de-orbit timing are altitude and fragment density. Tungsten powder particles can be made any desired size, and it turns out that roughly 10 micron particles at 800km de-orbit in a year. So the cloud of artificial powder won’t hang around forever. While this cloud gradually swirls inwards towards the Earth, it is sweeping up debris it encounters along the way. Indeed, a 20 T payload of powder at 800 km can easily increase the cross-sectional density of the local “atmosphere” by a factor of a thousand. That is, a single Falcon 9 launch of powder to the target orbit can reduce debris lifetime by a factor of a thousand or more.

It gets even more clever. By tuning the orbit and particle size, it is possible to target only orbital debris. Functional satellites that encounter the particle cloud will be slowed down incrementally, but only the targeted smaller debris chunks will de-orbit at a faster rate than the powder particles, greatly amplifying their effect. In essence, the cloud of debris is a broom that overwhelmingly affects debris particles below a certain tunable critical size. For debris this size and smaller, the cloud of powder acts as a distributed parachute, effectively increasing the drag cross section of the debris, and forming a kinetic “bridge” between the incredibly sparse air molecules at high altitudes. This bridge provides an efficient mechanism for the dissipation of orbital kinetic energy.

Why tungsten? The patent calls for tungsten because of its high density, which can increase the efficiency of momentum transfer. Historical launches of metal, however have proven problematic due to the fragments sticking together on deployment and surviving re-entry. It turns out there’s another readily-available material that’s stable enough in vacuum, less susceptible to solar-wind induced static adhesion, and completely biodegradable. It’s available in a range of powder particle sizes and can be ordered by the container load. Reader, I refer to confectioners sugar. Sweet!

It is not my intention to make light of a serious issue. We’re already 30% of the way to a serious problem, and unfortunately none of the responsible stake holders are making much of an effort to fix the issue. That said, there are physically straight-forward ways to address an incipient Kessler Syndrome, if the situation becomes that serious.

5 thoughts on “Space debris, probably not coming to a backyard near you”