This blog is part of my series on countering common misconceptions in space journalism. It’s an extension of my post dismantling the case for space-based solar power.

As a writer in the public sphere, I am fortunate to have almost always received positive feedback for my writing. That said, I do listen to criticism and my post on space-based solar power was criticized for failing to address the substantial published literature on this topic.

One interlocutor recommended reviewing the Japanese literature on the subject, and provided some links to (English, fortunately) articles on aspects of the problem. While I am unable to read Japanese, I am extremely doubtful that writing the physics in another language will change the result.

In my previous post I consciously chose to ignore most of the hype and, instead, drilled into the core physics of the problem. On numerous occasions in my career I’ve been called upon to quickly find an answer to some poorly understood problem, such as magnetic levitation or numerical convergence of gravitational wave simulations. There is some skill to finding the biggest, most communicable issue and understanding how it changes everything else. In the case of space-based solar power, it just doesn’t matter what the rectenna is made from, or what orbit the power station is in, if there is another effect with a thousand times the impact on the bottom line.

As a result, none of the papers I’ve reviewed for this post have changed my analysis or my conclusions. I know incrementally more about high frequency power converters, but at the end of the day, power is cheap and rapidly getting cheaper on Earth, while it remains expensive in space. I want huge space stations as much as anyone, but I’m unwilling to lie myself into thinking that space power is the way to get them.

In this blog I’m going to review three papers on space based solar power. I had initially planned to do five, but the remaining two were not focused on economics and covered ground already dealt with in the first three.

The first is Space Solar Power Programs and Microwave Wireless Power Transmission Technology, by James O. McSpadden and John C. Mankins, appearing in IEEE Microwave Magazine in December 2002, and garnering 414 citations since then. It begins with a handy review of a 1970s-era study suggesting a R&D budget of $300b (in 2002 USD), before focusing on wireless power transfer (WPT). Although at this stage only small-scale prototypes of high power microwave transmitters had been built, the article’s working assumptions are for 70-85% transmitter efficiency and 90% receiver efficiency. Including beam control losses and antenna side lobes reduces net WPT efficiency to the order of 45%, which is consistent with my earlier assumptions. While essential for any space-based solar power system, the precise cost and efficiency of the wireless power transfer doesn’t make a huge difference to the bottom line, compared to launch costs.

The second article is A Fresh Look at Space Solar Power: New Architectures, Concepts and Technologies by John C Mankins, published at the 38th International Astronautical Federation in 1997, and garnering 159 citations since. Interestingly, the second sentence reads “During the first decades of the new century, global demand for electrical power is projected to grow dramatically – perhaps doubling from 12 terawatts to more than 24 terawatts. Achieving this power growth while managing environmental impacts effectively is a cruical [sic] international challenge.” In 2017, world electricity consumption averaged 2.7 TW, with a peak capacity of about 6.5 TW. Growth rates hover between 2% and 3% a year, meaning that consumption will hit 12 TW in 2080 and 24 TW in 2110. Additionally, more than 2/3 of current production growth is in renewables, whose installation costs are falling at up to 10%/year. In short, the hypermalthusian assumptions that underpin space-based solar power advocacy are not economically sound, nor are they reflected in the real world. Later, the source of these projections is revealed to be the US DoE’s Energy Information Agency (EIA), about whose predictions’ accuracy nothing further needs to be noted.

The article continues by summarizing and critiquing the 1970s DOE study, that called for thousands of person-years of space construction and, quite obviously, failed to deliver a competitive product. The most salient change mentioned in 1997 for what had changed since was a recognition by NASA that prohibitive costs to orbit were strangling commercial space opportunities. For all this recognition, the first commercial cargo transport contracts weren’t awarded until 2008, and the shuttle wasn’t retired until 2011.

According to this paper, “transportation system concepts that could deliver SSP elements to LEO for costs on the order of $100-$200 per pound … appear feasible.” As a reality check, SpaceX’s ridiculously cheap, industry-destroying, partly reusable Falcon Heavy can deliver cargo to LEO for as low as $1000 per pound. A factor of 10 here is not a small problem. It has the potential to elevate logistics costs from, say, 20% of the total cost to more than 70% – the single most dominant cost factor. Advocates for SBSP maintain that SpaceX’s Starship could deliver cargo at a cost as low as $100 per pound, and that’s great. But in the meantime, ground-based solar power has also gotten more than ten times cheaper.

In Figure 4, there is a concrete business model with numbers. It projects a public/private partnership to develop 24 satellites producing a total of 4GW over a lifetime of 40 years. It assumes $400/kg launch costs, a total installation cost of $40B ($10/W), and total revenue of $270B. The power cost (less investment) is projected to be 4c/kWh and the retail price 21c/kWh. 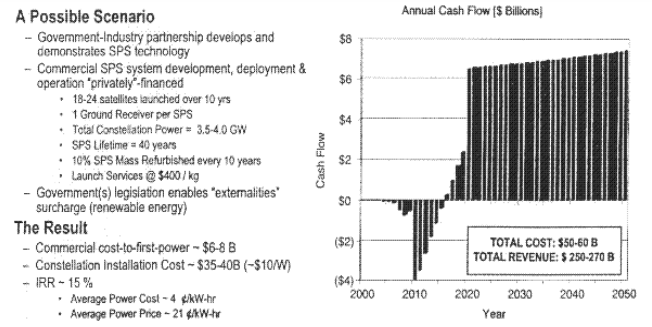 These costs are very optimistic (based in part on severely faulty demand assumptions), but I’m happy to grant them and instead compare them to the development of a modern solar plant, such as Pavagada Solar Park. Total rated output is 2GW, at a total cost of about $2b. Even taking into account capacity factor, this is 40% cheaper than the space solar station. Total development time is about three years, instead of 20. Retail electricity prices started at about 5c/kWh but have since fallen to 1.7c/kWh due to economies of scale. It is one of about ten GW-scale solar farms currently under construction. In Los Angeles, solar+storage is retailing at 3.5c/kWh – obviating concerns about capacity factor. To summarize, despite the significant optimism of the space based solar power business model, actually existing ground based solar power is 10x cheaper and 10x faster to install, 10x cheaper to purchase power from, and growing at about 30% a year. It requires almost no front-loading of development costs, it is getting much cheaper every year, and it also doesn’t require unbelievably cheap launch.

The third paper of note is SPS-ALPHA: The First Practical Solar Power Satellite via Arbitrarily Large Phased Array, also by John C. Mankins who by this time had set up his own consultancy: “Artemis Innovation Management Solutions LLC”. It was published as part of a NIAC study in 2012 and has 92 citations. What we lack here in author diversity we will make up in a time-series study of assumptions.

To begin with the executive summary, “it appears that a full-scale SPS-ALPHA, when incorporating selected advances in key component technologies should be capable of delivering power at a levelized cost of electricity (LCOE) of approximately 9c/kWh.” In other words, if we add enough advanced widgets, we can get the cost down to the standard US 2012 baseload electricity cost. In 2019, it turns out that technology improvements lowered the cost of ground-based solar+storage to 3.5c/kWh, so SPS-ALPHA will need yet more shiny widgets to compete in the future.

It can look suspicious when a high level cost estimate, employing numbers with uncertainties as great as 1000%, returns a final number that is exactly what it needs to be to compete with the going electricity rate in whatever year that report is published. And yet, in all three studies reviewed here, that is exactly what happens. All three reports are happy to predict wildly optimistic demand growth, and none even mention the steadily falling costs of competing supply.

The remainder of the report goes into vast detail regarding the conceptual design of self-assembling hexagonal space LEGOs, all of which can be regarded as cheapish mass-produced advanced satellites with solar panels and stuff on them. The actual details and costs of these parts doesn’t matter a whole lot unless their delivery cost to orbit drops below where even Starship might end up.

In section 4.2 we find that costing was done using a spreadsheet (NASA-grade, of course) derived from the 1997 Fresh Look study addressed above. We find that cost effectiveness depends on satellite systems cost falling below $500/kg, which occurs after the 260th unit is produced, assuming that the learning curve results in production costs halving as manufacturing quantities double, nine times in a row. In comparison, solar panel manufacturing costs drop about 5% per technology iteration, every 6 months or so. Solar panels are much simpler than satellites, which are more like cars. Henry Ford drove incredible reductions in car price, but at the end of the day there is a certain cost floor determined by the commodity cost of materials and specialty suppliers, which is why our cars are not disposable. So I think this assumption is rather dubious, but in the spirit of generosity I’ll grant it and make no further mentions!

There is a long discussion of various energy markets, as well as the identification of certain niche markets willing to pay 10-100x the going market rate for energy, such as military bases and small islands. Unfortunately, the net contribution to the market of such niche uses is so small it can’t support a SBSP industry, or even much of a terrestrial small/cheap power industry. There is also an extensive discussion of more speculative uses for SBSP, such as powering electrically propelled space probes and crewed Mars and Moon bases.

In Section 7 we get a detailed description of the optimal design cases identified by their unified systems design spreadsheet, including (in one case) a total platform hardware mass of 11,795,271kg, with no error bars. This solar power station is to deliver 500MW of power. Even accepting wildly generous launch cost estimates of $500/kg, the total launch cost of this satellite is about $6B, with manufacturing cost about the same. For the same money, any number of contractors could deploy 12GW of solar power. That’s 25x as much power, delivered in years rather than decades.

These estimates were performed in 2012, only 7 years ago. And yet, in the short time since, we have seen the numbers go from “don’t look too closely” to “not even on the same planet”.

At this point I’ve pulled out the relevant data from a series of papers by an authority on the topic, spanning nearly 20 years. Over and over again we see the same key weaknesses:
– Faulty projections of unmet electricity demand.
– Consistently optimistic estimates of construction and launch cost, at least an order of magnitude beyond current best industry standards.
– A disproportionately large focus on the relatively irrelevant cruft such as scifi applications and the minutiae of RF transmitter design.
– A failure to understand the forces driving innovation and cost improvement in the renewable electricity industry.

Space-based solar power is still not a thing.

Do you know of another article that you think changes the calculus here? Send it my way. If it adds to the conversation, I’ll happily add it to this post.

16 thoughts on “No really, space based solar power is not a useful idea, literature review edition”