Skip to content
Two weeks ago I zoomed east to St Petersburg. My parents (B and A) were going to be there for 3 days. I visited about 10 years ago and I had always wanted to show close friends or family something of the experience and discoveries I'd had there. Last year I had the pleasure of sharing Vladivostok with my sister, and now I had the opportunity to share the European part. I spent a few minutes brushing up on my shockingly terrible Russian, then stuffed my pockets with spare underwear and set out.

After a busy weekend, I headed to LAX, went through the usual hassle, and boarded a flight to Amsterdam. On the flight I watched “Magical Beasts and Where to Find Them,” which was lovely. I also watched “Inferno” which imbued me with a deep and occasionally recurring desire to live in Rome. In Schipol airport I found the lounge, snacked, then slept on the way to St Petersburg Pulkovo airport, where I set up camp to wait for B and A who were flying in a few hours later. The best place to wait was by the oversized baggage collection point, so I helped get a few children into strollers.
Eventually B and A showed up, we took a bus to the metro, then a metro (with minor ticket drama) into the city, then walked to the hotel. It's best to approach a city on its own terms. Uber is cheating! I had found an airbnb near my parents' hotel, so I settled in and started to plan the next 48 hours with extreme focus.
That was day 0. This is day 1. I woke at 6:30am, many hours after the midsummer dawn. We walked down Nevsky Prospekt (the main street) to the monumental Kazan Cathedral, which has a huge colonnade at the front. Later that morning we met the outreach director for the Vavilov seed bank, who showed us the inner workings of this storied institution in St Petersburg. Set up in the 1920s to preserve hundreds of thousands of varieties of commercial crops, it remains active to this day. Its darkest hour was in WW2, when its curators barricaded themselves inside to protect the seeds from hungry people during the 3 year Leningrad siege, and also devious rats. Many of the workers starved rather than tuck into their huge supplies of seeds preserving natural biodiversity. The present day curator, S, also gave us a summary of Vavilov's theories about the 8 locations where all domesticated plant varieties originated. The last thing we saw was the cryogenic storage vault, which contained impressively home-made looking liquid nitrogen machines.
A quick break for lunch in a place that was way too fancy, then a tour of St Isaac's cathedral, which has a publicly accessible cupola with amazing views of the city. Sadly, we missed a hydrofoil to Petrodvorets (the summer palace) so instead walked across the river to the Peter and Paul fortress, where we took in a few museums with all kinds of cool stuff. We came back via the Church on the Spilled Blood, commemorating the location where one of the Tsars was assassinated. It survived bombing in WW2 but sadly closed minutes before we arrived. It rained intermittently throughout the day, and at about 3pm the skies opened. We ducked into a dumpling restaurant and recharged. We headed back to the hotel to relax, before going out to dinner with a couch surfer.
We took an Uber into one of St Petersburg's older districts (the sun was still up at 8pm), climbed up an atmospheric stair case, and found the home of V, a musician and frequent host of travelers in the area. V, one of his guests, and the three of us had a terrific dinner (which involved pasta) and swapped many stories of life traveling around Europe singing traditional songs for children. V trained as an engineer but took up music in the 1990s as a way to travel and see the world. Alas we could spend only a couple of hours and barely peeled back a single layer of the Russian mystery. But better than nothing.
Around midnight the sky was still light but it was time to sleep.
Day 2 we once again woke absurdly early. We walked back into the central square via my old hostel, which seems to no longer exist. We had arrived quite early, and the guide's tickets were a bit late, so we ended up spending just over an hour in our warm jackets and rain coats admiring the Baltic weather (freezing wind and rain on the summer solstice!) before finally we got into the Hermitage museum. Previously I'd had to self guide around this museum but with my parents in town I took no chances and hired a professional guide, who also gave some free insight into the Russian mentality towards certain types of tourists. I'm not sure if I enjoyed it more before, I'm certainly older and harder to impress now. Aspects of the structure and architecture stood out more now, and several new rooms had opened. It's an incredible place! I prefer the sculptures, but there's some amazing stuff in there.
We grabbed some lunch, met some Russian tourists from the Ural mountains, then I did another tour of the museum while B and A prepared a final devastating assault on both the gift shop and the efficacy of punitive economic sanctions.
Unfortunately, the ballet and opera were, by this time, booked out, so we evolved the plan and went to the state Russian art museum. There were some incredible paintings there from Russia dating back to the beginning. Standouts included paintings of ocean scenes and of course the iconic Reply of the Zaporozhian Cossacks. Shipwreck by Ivan Aivazovsky (who has the best sideburns EVER). 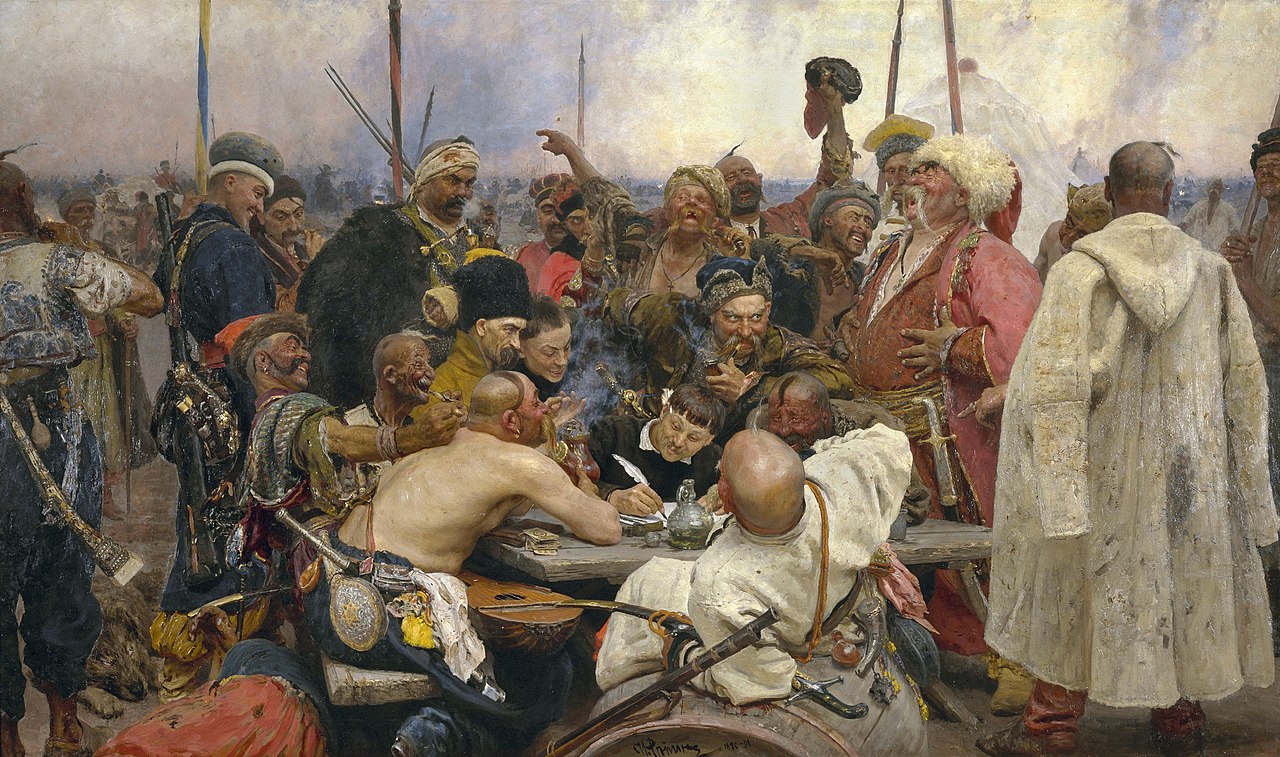 Reply of the Zaporozhian Cossacks by Ilya Repin.
Once again on leaving the museum we were crushed by rain, found another dumpling restaurant (I have a sixth sense), then B and I walked to the main railway station. This is as far east as I went by train about 10 years ago, but I didn't have strong memories of it – arriving in the very early morning in winter. It turns out there isn't much there – a big concrete entrance hall, and a shop with a talkative assistant who knew quite a lot about geology. We located some more chocolate.
Day 3, an early morning meeting with a couch surfer fell through so we headed to the airport, raided the lounge, and talked about Cuba. I politely declined too much daddy-sign-cheque, then boarded Air France flight homewards. I ordered a vegan meal (they get served about 20 minutes early, so if you're quick you can get two sets of snacks), then settled in for a series of flights and high altitude movies back to LA.
Well I've now been to St Petersburg for a total of five days. Both times I saw much the same stuff. One day, one day I will see the other palaces, art museums, opera, ballet, boats, and connect better with a local scene. But what's the point of Russian? =P
One doesn't often get the opportunity to press rewind and revel in the mix of past and present, much less the chance to appose developmentally important aspects of your life. In this case, my parents cooked me pretty well until I was 18, at which point I took over and flame roasted the outer husk in a series of terrifying adventures. Now that process has gone, in some sense, full circle. It was quite cool to spend time in Vladivostok with my sister A last year. Now only my brother remains to adventure in Russia. The eastern BAM, Sakhalin, Taymyr, and the Kuril islands await. Consider yourself warned!